Diagrams of Effects were first introduced in the famous four-volume series: Quality Software Management by Gerald Weinberg. It is a great enabler when trying to understand the dynamics of a system exhibiting non-linear behavior, very similar to software development team systems.

Diagrams of Effects are similar to Causal Loop Diagrams (CLD), but it is slightly different in notation and is more powerful in modeling human interventions in the system. A diagram of effects consists primarily of nodes and arrows. Each node corresponds to a measurable quantity. Easy arrow corresponds to an effect (whether positive or negative) which the source node exhibit on the target node. This is a description of the diagram elements:

What is interesting about Diagrams of Effects is that they reveal Reinforcing loops and Balancing loops. Reinforcing loops are cycles of effects which reinforce each other and may drive the system to failure. In the following example, more bugs lead to higher levels of stress which leads to more bugs. Also, it works in the other way as well, less bugs leads to less stress which leads to less bugs: 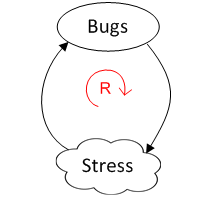 Another type of feedback loops is the Balancing loop, in which one effect balances another. In the following example, in case bugs increase, team exerts more effort in code review which leads to less bugs, which balances the effect of increasing bugs: 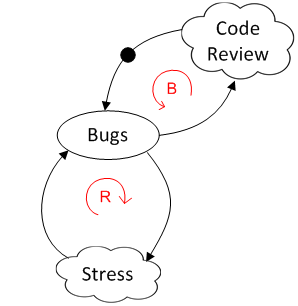 Such dynamic is not possible to be studied using  2-dimentional graphs. This is why Diagrams of Effects is an excellent tool for analyzing complex systems.

I have a strong belief that the software developers’ primary suffering is due to bad software engineering practices. This blog is trying to highlight these practices, and make an effort to resolve them.

This blog is a pure practical one. Every post corresponds to a personal experience that I gained during my software development life, and effectively resolves one of the sufferings which, one day, a software engineer will suffer from!

I'll present some "ground rules" for sustainable code refactoring. Such ground rules are extremely useful for technical teams and for team leaders to empower teams do sustainable and continuous improvement for product code.